The Ordeal of Mercy 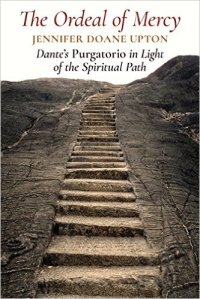 The Ordeal of Mercy

Dante’s Purgatorio in Light of the Spiritual Path

The Ordeal of Mercy is a book of wide erudition, simple style and sometimes shocking depth; its goal is to present the Purgatorio as a practical guide to travelers on the Spiritual Path. In the words of the author, “The soul in its journey must divest itself of extraneous tendencies and desires in order to become the ‘simple’ soul of theology—the soul of one essence, of one will, of one mind. If it can do this it will reach Paradise, its true homeland.”

Other exegetes of Dante have dealt with the overall architecture and the philosophical and historical background of the Divine Comedy. Jennifer Doane Upton, however—while preserving the narrative flow of the Purgatorio and making many cogent observations about its metaphysics—directs our attention instead to many of its “minute particulars”, unveiling their depth and symbolic resonance. She draws upon many sources: the Greek Fathers, particularly St. Maximos the Confessor; St. Augustine and St Thomas Aquinas of the Western Church; St. John Climacus; the metaphysical poets, including Donne and Blake; modern Eastern Orthodox authors Pavel Florensky and Jean-Claude Larchet; the Perennialist/Traditionalist writers René Guénon, Frithjof Schuon, Titus Burckhardt, Martin Lings, Leo Schaya, Wolfgang Smith and Ananda and Rama Coomaraswamy; and the doctrines of Dante’s own initiatory lineage, the Fedeli d’Amore. She presents the ascent of the Mountain of Purgatory as a series of timeless steps, each of which must be plumbed to its depths before the next step arrives; in so doing she demonstrates how the center of this journey of purgation is everywhere, its circumference nowhere.

The Ordeal of Mercy is dedicated to the recovery of a great lost tradition—Christianity. If the western world forgets Christ it will forget its own history; if it forgets its history, it will find no reason to keep on existing. If the comprehensiveness and Catholicity of Christianity are obscured, if we lose sight of its great civilizing power, the future will be grim for all of us—and there is no better way to restore such understanding than to unpack the riches stored up in Dante’s great Divine Comedy. The Purgatorio in particular has to do practical spirituality, the union of Grace and Works. If our souls are in chaos we will spread chaos; if they are in order, we will bring order to the world. And if Christianity is no longer destined to be the dominant force in western society, The Ordeal of Mercy will nonetheless remain highly useful to inform and strengthen a Christian Remnant.