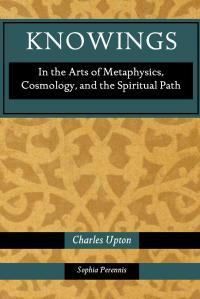 In the Arts of Metaphysics, Cosmology
and the Spiritual Path

As the poet T.S. Eliot said, “Where is the wisdom lost in knowledge? Where is the knowledge lost in information?” Our postmodern “information culture” forces us to be over-cerebral, but it doesn’t teach us how to think; consequently it becomes nearly impossible for us to imagine a knowledge that is beyond information, much less a Wisdom that is beyond knowledge. We all know what it is to uselessly “spin our wheels” in barren thought and fantasy; certain valid contemplative disciplines even have as their main goal the pacification of the “monkey mind”, the over-heated brain that prevents us from genuinely living our lives, from being fully present to the world, to each other, and to ourselves. But such pacification can also have a nihilistic side to it. It can subtly fool us into believing that the pursuit of meaning, the attainment of intellectual stability and certainty, is neither possible or desirable—a belief that is of great use to the political and economic Powers That Be in the emerging global society, who are always delighted to hear people express the opinion that there is no such thing as objective Truth, that we can’t really know what is real, or if anything actually is real, beyond our own subjective experience. To the degree that the people start to believe that nothing can be known (our hidden masters reason), they will stop asking embarrassing and inconvenient questions. The notion of objective truth—not to mention Absolute truth—immediately suggests oppression, tyranny and fanaticism to the postmodern mind. Why? Because we have been systematically taught to see things this way by those Social Engineers who construct and impose the terms by which Reality is to be viewed. In order to break free from this socially-imposed subjectivism, we need to remember that Reality is not something determined by belief, but rather that belief is only true when it conforms itself to Reality. If we see nothing beyond this material/social world, we will be forced to take our own subjectivity as the only way to awaken from the social trance, and so fall even more deeply into that very trance, which is precisely a collective subjectivity. But if we know Objective Truth as metaphysical, beyond material nature and human society, then we have begun to catch a glimpse of the One Way Out. The traditional notion of Knowledge maintains that, 1) Truth can be known with certainty, and, 2) that the reason for knowing Truth is to transform our lives from a state of chaotic uncertainty, vulnerable to all the suffering that illusion and impermanence can produce, into one of eternal certainty and stability, where the knower becomes one with the Thing Known—a state that goes by the name of “bliss”. To begin the path toward this bliss, however, we will need to know how to know; and this requires, as the necessary first step, that we know how to take knowledge seriously. As metaphysician Frithjof Schuon put it: “Knowledge only saves us on condition that it enlists all that we are, only when it is a way and when it works and transforms and wounds our nature, even as the plough wounds the soil”. The shifting illusions of individual and collective subjectivity cannot protect us, and will always betray us. But if we are firmly rooted in that Truth which, in the words of Lew Welch, “goes on whether we look at it or not”, then we have a Protector—one Who is always there, upon Whom we can always rely, and to Whom we can always turn, when we can no longer remedy or deny or escape from the suffering and insecurity of conditional life.